About this time last year I posted an entry where I detailed my ideas for using the Samsung SmartThings ecosystem to get hold of my home’s Gas and Electrical usage data. Since then I have developed a simple SmartThings App which achieves this, so thought I’d share the details.

SmartThings provides its users with the ability to write “SmartApps”. A SmartApp is essentially a Groovy script, which is written in the SmartThings Groovy IDE and implements various methods, providing access to various functionality.

Additionally SmartApps can subscribe to various event types which exist within the SmartThings environment. Events are emitted by “devices”, which can be either physical or virtual. As such the catalogue of available Event types is continually increasing as third parties add new devices to the SmartThings ecosystem, integrating their services.

Subscribing a SmartApp to certain events is easy and can be achieved by simply calling the provided subscribe() function, passing in the details of an event type and the SmartApp method which should handle events of that type e.g.

A Map containing any associated event data is passed in to the event handler method.

My energy supplier Bulb, have implemented a SmartThings app called the Bulb SmartThings Energy Controller (STEC). The STEC app registers a virtual device in your SmartThings account which obtains the energy usage data from your gas and electrical smart meters and makes them available in the SmartThings app on your phone.

Here are some of the screens from the STEC SmartThings app.

Note: Despite Bulb using the name “Bulb SmartThings Energy Controller” in various bits of documentation the SmartThings app refers to itself as “Bulb Energy Meter”.

Having installed the STEC app, I did a bit of poking around and discovered that it emits 2 types of events for consumption within the SmartThings ecosystem: energy and gasMeter. These sounded like just what I was after so I decided to try and consume them in my own SmartApp.

The design is pretty straight forward; essentially it boils down to:

The diagram below shows the intended data flow: 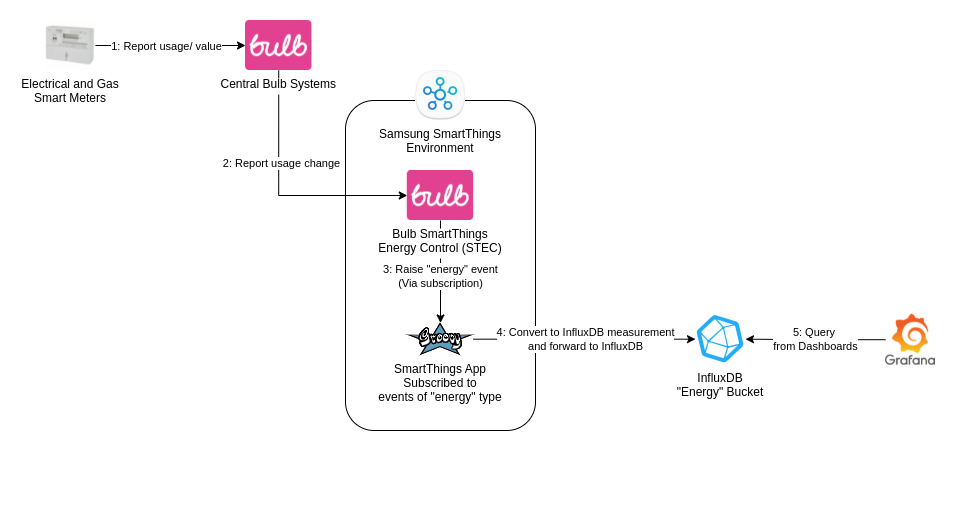 I defined the configurable aspects of the SmartApp by defining some inputs in the preferences closure:

This allows the user to select their virtual bulb smart meter device and to provide the app with the necessary details to send data to an InfluxDB API endpoint, when installing the SmartApp.

Having added the above code to the SmartApp I ran it in the SmartThings IDE simulator, which presented me with the following screen:

This provides the mechanism for selecting my Bulb virtual energy meter and configuring the InfluxDB endpoint details.

The next task was to subscribe to the energy (Electrical) and gasMeter events. To do this I defined a very simple event handler method for each type of event:

Having defined the methods I then used the initialise method (which is called when the SmartApp is first started) to set each method up as the event handler for its associated event type.

Note that the thing we’re subscribing to here, the bulbEnergyMonitor, is the Bulb Energy Meter identified in the preferences section above:

Looking at the event data

Using the simulator I clicked the “Install” button. At this point I could see the following in the logs:

Great news - this was confirmation that I had successfully received an energy event! I was keen to find out if the event contained any other data, specifically a timestamp so I could use that rather than having to rely on the current time, which might skew my data.

Having discovered the event properties I felt like each event contained an adequate set of information to generate some meaningful graphs and dashboards. The next challenge was to see how I could get the data out of the SmartThings ecosystem and in to my own system.

As the eagle eyed amongst you may have noticed, the parameters I configured above provide an endpoint and authentication details to an InfluxDB endpoint. I configured an energy Bucket in my InfluxDB system, created a dedicated access token for this application, which had write access to the energy Bucket and configured the InfluxDB details in the Smart App parameters.

Disclaimer: For the purposes of this project I decided to make an InfluxDB endpoint available on the internet. The transport is encrypted and it uses a dedicated token, which follows the principle of least privilege. However this is not an approach I would recommend for anything other than a toy setup such as this. Please do consider your own data security needs if you choose to implement this yourself.

The next thing to do was to write a function which extracted the data of interest from each event and converted it to an InfluxDB measurement in line protocol format:

Having the event in line protocol format the final task was to send the data over to InfluxDB. This took a little bit of head scratching and I wondered if SmartThings might protect against outbound internet access to protect from data exfiltration. However I eventually discovered that the SmartThings environment provided an httpPostJson method, which I was able to use to send the data to InfluxDB:

The logs confirmed that InfluxDB was responding with a 204 status code, suggesting that data was making its way in to InfluxDB:

I wanted to be able to aggregate the readings on certain time intervals (per hour, per day, per month etc). After a bit of fiddling I came up with the following Flux query which allowed me to configure the aggregation easily:

I found this graph really useful. The graph shows that (generally speaking) our gas usage overnight is very low, which is good as we don’t want the boiler using loads of gas when we’re all asleep. Additionally it typically shows much higher usage for 1 - 2 hours at around 7am each day. Of course this coincides with our heating schedule, but I expect this will prove to be a useful tool to tune our schedule to reduce gas usage in the future.

The period shown in the graph shows a significant change in outdoor temperature between the first 4, and last 3 days. Corresponding with this there’s a distinct decrease in gas usage during the warmer days.

I wrote a similar Flux query to graph our reported electrical usage:

I didn’t overlay the outdoor temperature data on this graph as it didn’t seem relevant given that our electrical usage doesn’t power any heating devices. The resulting graph looks like this:

Unlike the gas graph, the electrical graph doesn’t show a particularly strong daily pattern. However it does show our “phantom load (also known as standby power or vampire power), which seems to sit at around 160 - 170 watts. I don’t know how that compares to most for a house and family combination such as ours but it’s a good reminder that devices such as fridges, freezers, dishwashers etc continue to use electricity throughout the night.”

Shortly after setting everything up I noticed that my Gas usage graph appeared to have stopped working and was presenting a flat line. On closer inspection it appeared that my meter had emitted 2 changes in gas usage which were so large (minus and plus 62 megawatt hours respectively!) that they made all other readings so small by comparison that the graph appeared flat apart from these 2 readings:

I wondered if this was some sort of understood smart meter behaviour, perhaps a periodic recalibration or reset, so I asked Bulb to explain the behaviour.

Unfortunately Bulb were unable to tell me why this had happened. Part of me wanted to dig my heels in and try and get a clear answer from them, but I didn’t feel like their customer services were going to be forthcoming. Given that the net increase after the 2 huge readings was an increase in 1 kilowatt hour I decided to let it remain a mystery and move on.

In case anyone is interested in creating an instance of this app for themselves I have made the code available in my smartthings-bulb-energy-publisher Github repository.

Rather unfortunately, about a week after I finished writing the code I stumbled upon an announcement from Samsung stating that they will be decommissioning the SmartThings Groovy IDE in favour of a new API based replacement. The announcement was made back in June of 2020 and we’re now in the first quarter of 2022, so it looks like they’re behind schedule. But I thought I’d mention this in case anyone gets the app set up and is then disappointed due to Samsung following through with their decommissioning plans.

Please leaving a reaction or comment below to let me know if you have found this useful or interesting. I’d love to know if anyone gets the app up and running themselves or if you’ve implemented something similar yourself.